New motion planner promises wheeled robots that get around obstacles faster and neater.

Skoltech researchers have developed a method to enable wheeled robots to avoid obstacles in a fast, efficient, and natural way when moving in a crowded setting. Reported in IEEE Robotics and Automation Letters, the new motion planner leverages machine learning and could be useful for robotic disinfection, stocktaking, and car parking.

Robotic navigation in two dimensions, getting from A to B without running into obstacles, is a classic task that has been solved in a number of ways since the late 1980s. Some of the problems with the existing solutions are that the planners take a long time to establish a path, sometimes fail to do this altogether, or offer suboptimal trajectories that are too long or not smooth — what people intuitively refer to as moving “like a robot.” Also, some of the existing planners are only good for robots that have a round body or are omnidirectional — can drive in an arbitrary direction from a standstill. 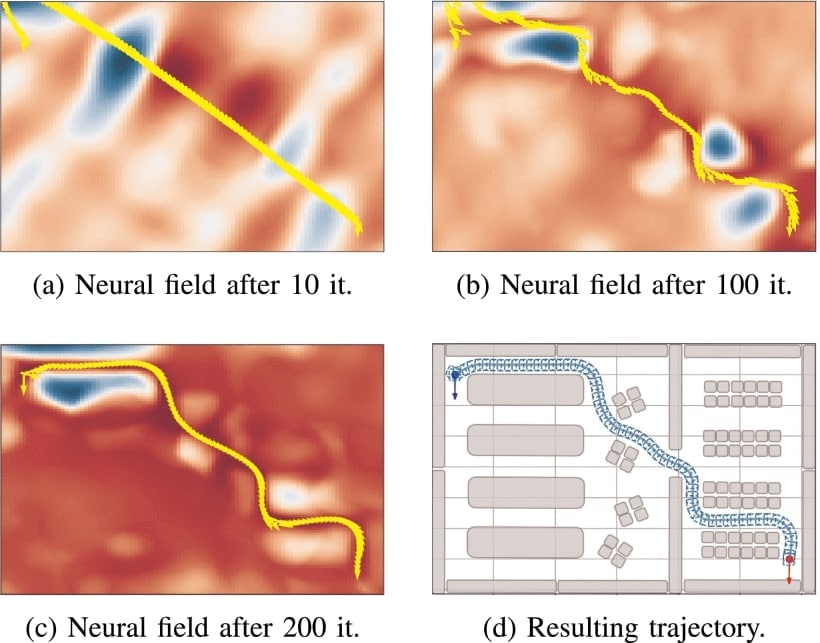 The study’s first author, PhD student Mikhail Kurenkov from Skoltech Engineering’s Intelligent Space Robotics Laboratory headed by Associate Professor Dzmitry Tsetserukou, commented: “We have developed a planner that works with robots which are not round and not omnidirectional and outperforms the conventional motion planning approaches that use the Gaussian process and the rapidly exploring random tree algorithm. Our method uses what’s known as the neural field concept. It hasn’t been applied to motion planning a lot, at least not in 2D, which is what we’re doing.”

Neural fields are not unlike the fields in physics, but in this case the values they store for each point in space are things like “what the distance to the nearest obstacle is” or “to what extent that point is empty or occupied by obstacles.” The former finds applications in graphic design and animation, and the latter is actually the value used by the new robot motion planner created at Skoltech. One of the recent developments in neural fields is enlisting machine learning and using neural networks to parametrize the field. That is how the new planner works.

To test how well it performs, the researchers compared their planner with more conventional solutions: a Gaussian process motion planner and a rapidly exploring random tree algorithm. The neural field-based method proved to build ultimately shorter and smoother trajectories and require fewer awkward turns in place.

The test relied on an openly available dataset with multiple scenarios, including corridors, parking lots, and city grids. This gives a taste of the kind of robots that might benefit from the planner: For one thing, it could aid disinfectors, inventory counters, and other service robots in malls. The urban environment scenario also suggests applications in robotic parking systems.